Laboratory of physical-chemical methods of investigation and analysis is a part of the Department of Biophysics, the FSBIS SRI PCM FMBA of Russia. The laboratory was established on March 01, 1999 by an order of the Director of the Institute, Prof. Yu.M. Lopukhin, a Full Member of the Russian Academy of Medical Sciences.

Problem under research:
Elucidation of the mechanisms underlying the damage caused to the components of blood and vessel wall by activated phagocytes in the conditions of oxidative/galogenative stress and inflammation.

Myeloperoxidase (MPO), a heme-containing enzyme, is secreted by activated neutrophils and monocytes into extracellular space at sites of inflammation. The major function of MPO is the production of hypohalous acids (HOCl, HOBr) which are strong oxidants. On the one hand, due to such enzymatic activity, MPO fulfills its antimicrobial role, defending the body from pathogens. On the other hand, MPO participates in a number of events involved in damage of the body’s own tissues. In our study, the factors that can influence in vivo the halogenating activity of MPO were investigated. As the results show, lowering pH and the presence of small amounts of phenolic peroxidase substrates can cause an increase in HOCl production by MPO.

Ceruloplasmin (CP), an acute phase inflammatory protein, was found to inhibit, by binding to MPO, the enzyme activity. This was proved by three independent methods: chemiluminescence; estimation of MPO chlorination activity with the taurine chlorination assay; estimation of MPO peroxidase activity. The bigger the substrate molecule size was, the higher the inhibitory effect of CP on MPO peroxidase activity. Thus, the inhibitory effect of CP at the level of the MPO-CP complex was apparently due to steric hindrance, which resulted from the MPO-CP interaction, for substrate binding to the MPO molecule.

Human blood low-density lipoproteins (LDL) modified by HOCl cause cholesterol accumulation in vascular wall cells, thus promoting the development of atherosclerosis. HOCl is produced by the enzyme myeloperoxidase (MPO) during the halogenation cycle. In our study, we showed by affinity chromatography on Sepharose-bound MPO that LDL binds to MPO. The binding was inhibited at ionic strength greater than 0.3 M NaCl or at pH lower than 3.6, indicating the ionic nature of the interaction between MPO and LDL. Using lipid spin probes, we found that interaction of MPO with LDL had no effect on the surface lipid domain on the LDL particle, which suggested that LDL lipids were not involved in the MPO-LDL interaction. At the same time, antibodies against apo B-100 blocked MPO binding to LDL. Among synthetic anionic peptides (1EEEMLEN7, 53VELEVPQ59 and 445EQIQDDCTGDED456) mimicking the apo B-100 sequence fragments, only the latter was able to dissociate MPO from the MPO-LDL complex. Thus, the most probable site for MPO binding on LDL involves the apo B-100 sequence stretch 445 – 456.

We investigated the effects of the peptide 445EQIQDDCTGDED456 (P445-4456) as well as of inhibitors and modulators of the halogenating activity of MPO, such as ceruloplasmin (CP), 4-aminobenzoic acid hydrazide (ABAH) and thiocyanate (SCN-), on the accumulation of cholesterol and its esters in monocytes/macrophages during incubation with LDL that had been variously modified by MPO-dependent oxidation and halogenation. Based on the results, we suggest the summarized scheme (Fig.) for the participation of MPO, MPO-generated reactive halogen species, the uncoupling agent P445-456 and inhibitors/modulators of the halogenating MPO activity (ABAH, CP, SCN-) in the pro-atherogenic modification of LDL and the formation of foam cells. 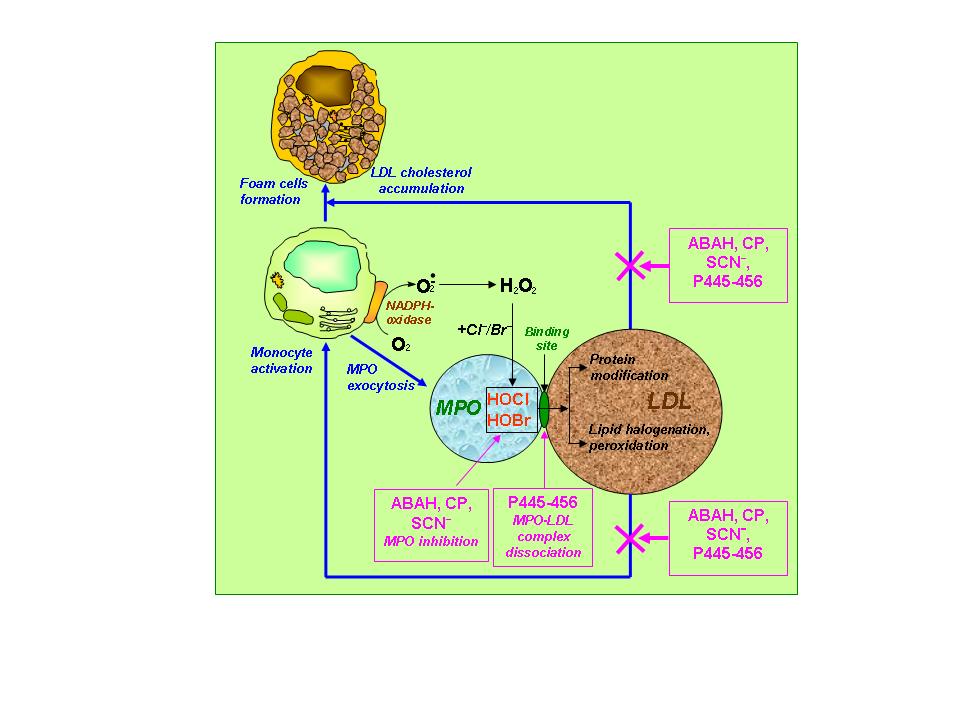 MPO binding to LDL results in the site-specific modification, which involves mainly the LDL protein, as well as in the halogenation/peroxidation of lipids by HOCl and HOBr, the species produced by MPO during the halogenation cycle. Modified LDL can stimulate leukocyte activation, thus inducing the oxidative burst and MPO exocytosis from neutrophils and monocytes (Fig. exemplifies these events for monocytes). The released MPO binds to LDL and causes, by using leukocyte-produced H2O2 as a substrate, their further modification, thereby forming the vicious circle to produce modified LDL. The modified LDL within the MPO-LDL complex is engulfed by monocytes/macrophages, which leads to intracellular cholesterol accumulation and foam cell formation. Inhibitors/modulators of the halogenating MPO activity (ABAH, CP, SCN-) as well as the uncoupling agent P445-456 prevent LDL oxidative/halogenative modification. This decreases LDL uptake by macrophages and, hence, decreases the intracellular accumulation of cholesterol and its esters. This also breaks the vicious circle involving neutrophil/monocyte activation and the formation of modified LDL. The presented hypothesis is supported by our finding of the complexes of MPO and apo B-100-containing lipoproteins in atherosclerotic patients whose plasma MPO levels were higher than 800 ng/ml.

Halogenated lipids, proteins and lipoproteins as modulators of cell activity and inflammation

Halogenated lipids, which are formed in MPO-catalyzed reactions, may play a role of a regulator of the functional activity of cells. We investigated the effects chloro- and bromohydrins formed in the reactions of 1-palmitoyl-2-oleoyl-sn-glycero-3-phosphocholine (POPC) with HOCl or HOBr, respectively, may have on several functional responses of human neutrophils, such as H2O2 production, degranulation (MPO exocytosis) and aggregation. Chloro- and bromohydrins of POPC were shown to induce neutrophil priming, which was manifested in a marked increase in cellular response to stimuli such as N-formyl-Met-Leu-Phe and Solanum tuberosum lectin. Results allow the proposal that halogenated lipids, which may form in vivo in MPO-catalyzed reactions, may be considered as a novel class of biologically active compounds, which are potentially able to exert a priming effect on myeloid cells at sites of inflammation and, hence, may be involved in modulation of inflammatory response.

Human serum albumin (HSA) modified with HOCl or HOBr (HSA-Cl/Br) was shown to induce degranulation of azurophilic granules (release of MPO), degranulation of specific granules (release of lactoferrin), NADPH-oxidase activation , cell shape distortion, actin cytoskeleton reorganization and to increase luminol-dependent chemiluminescence after stimulation with phorbol-12-myristate-13-acetate. HSA-Cl/Br-induced neutrophil activation, as observed by H2O2 generation and MPO exocytosis, was inhibited by anti-CD18 (an antibody directed against β-subunit of β2-integrins), genistein (a tyrosine kinase inhibitor) or wortmannin (a phosphatidylinositol-3-kinase (PI3K) inhibitor). Thus, MPO-dependent modification of HSA renders it the ability to activate neutrophil effector functions (by integrin-dependent pathways through activation of tyrosine kinases and PI3K and cytoskeleton reorganization), operating on the principle of positive feedback and acting as an inflammatory mediator.

Neutrophil incubation with HOCl- or HOBr-modified human blood low-density lipoproteins (LDL) resulted in a significant increase in the release of MPO (a marker for azurophilic granules), as observed by an increase in the MPO concentration and activity in the extracellular medium. At the same time, no increase in the extracellular amount of lactoferrin, a marker for specific granules, was detected. The results suggest that LDL modified in the conditions of oxidative/halogenative stress at sites of inflammation may play a regulatory role in the selective exocytosis of MPO.

A significant positive correlation was found between MPO activity in the blood plasma from children with severe burns and a degree of the increase in luminol-dependent chemiluminescence in neutrophils isolated from the blood of healthy donors and activated by phorbol-12-myristate-13-acetate in the presence of the albumin fraction obtained from the corresponding sample of the burn patient plasma. The results support the hypothesis that proteins modified with MPO in the conditions of oxidative/halogenative stress stimulate neutrophil activation, which leads to exocytosis of MPO, a key element in halogenative stress, and closing the vicious circle of neutrophil activation at inflammatory sites.

Patients suffering from diabetes mellitus without vascular diseases or diabetes mellitus complicated with ischemic heart disease exhibited elevated plasma levels of the activity and concentration of MPO, a marker for neutrophil azurophilic granules.  Plasma levels of lactoferrin, a marker for neutrophil specific granules, however, did not differ from those in healthy donors. In vitro experiments showed that HOCl-modified HSA, an in vivo product of MPO, induces selective degranulation of azurophilic granules, which is manifested by an increase in the extracellular concentration and activity of MPO. The results obtained suggest that the HOCl-modified protein found at inflammatory sites may act as a regulator of the selective exocytosis of MPO in neutrophils, increasing neutrophil bactericidal activity on the principle of positive feedback or by closing the vicious circle of cytotoxic effects of oxidants produced in MPO-dependent reactions.

Human platelets were examined for structural and functional changes caused by MPO. Using confocal laser microscopy, we detected the carbohydrate-independent binding of MPO to the platelet plasma membrane. MPO was found to potentiate ADP- and thrombin-induced platelet aggregation, which was associated with the depolymerization of perimembranous F-actin and an increase in the concentration of intracellular free calcium ions (Ca2+) due to store-operated Ca2+ entry into the cytoplasm. The data obtained suggest that MPO is a pro-inflammatory risk factor capable of increasing thrombus formation upon inflammation and associated pathologies.

MPO binding onto the erythrocyte surface was found to affect plasma membrane stability, causing a decrease in cell resistance to acid and osmotic hemolysis. The increase in hemolysis in the presence of MPO was mediated directly by the binding of MPO to the plasma membrane components, but not by MPO’s enzymatic activity. Using neuraminidase and different carbohydrates, we found a contribution of carbohydrate-mediated electrostatic interactions to the MPO-dependent changes in structural properties of erythrocytes. The effect under discussion was found to be caused by MPO binding to the glycosylated components of the erythrocyte plasma membrane.

A physical chemical study of the reactivity properties and the structural basis of stability of amino acid chloramines formed upon phagocyte activation, and an investigation of their action on blood cells

We found a new class of covalent inhibitors (antiaggregants) of platelet activity, which represent chloramine derivatives of biogenic compounds such as amino acids, taurine and peptides. In blood, these inhibitors exhibit a marked selectivity for the interaction with platelets. They all, independently of the type, have a generalized action, inhibiting all functional activities of platelets.

We purpose designed and studied new taurine chloramine analogues that have high stability, hemoselectivity for sulfhydryl groups in proteins, and specific antiaggregant pharmacological activity. In these compounds, the chemically reactive group is the chloramine group which covalently modifies proteins of the platelet plasma membrane.

Since the beginning of the laboratory, its present and past members authored the dissertations listed below.

1. Adnoral, N.V.: “The mechanism of the antithrombotic action of biogenic chloramines” (1999), a Candidate of Medical Sciences dissertation in Biophysics.

3. Pestryaeva, L.A.: “Development of informative laboratory criteria for assessing the severity of autointoxication during pathological pregnancy” (2002), a Candidate of Biological Sciences dissertation in Biochemistry and Clinical Diagnostics.

5. Chekanov, A.V.: “Mechanism of the interaction of hypochlorite and hypochlorite generating systems with organic hydroperoxides” (2004), a Candidate of Biological Sciences dissertation in Biophysics and Biochemistry.

7. Aksyonov, D.V.: “Modulation of the aggregation of human blood low-density lipoproteins” (2007), a Candidate of Medical Sciences dissertation in Pathological Physiology.

8. Petrova, A.O.: “Amino acid chloramines as inhibitors of platelet aggregation: the physical-chemical properties and mechanism of action” (2012), a Candidate of Biological Sciences dissertation in Biophysics.

2. Murina, M.A.: “Physical-chemical mechanisms of the action of chloramine derivatives of biogenic compounds and sodium hypochlorite on platelets” (2000), a Doctor of Biological Sciences dissertation in Biophysics.

Our laboratory has its own or has access to facilities and equipment for instrumental methods such as:

For many years the laboratory collaborated and continues the collaboration with a number of research groups in and outside the country, namely, within:

Our current projects, which are supported by the Russian Foundation for Basic Research (RFBR), are listed below: